I need to get an accurate idea of numbers, so that we don't overwhelm the start and midway points. So, please let me know if you intend to join me either via the Facebook event page or via email to angus@lavieenvelo.com. I do need to get an idea of the numbers that will be turning up, assuming that weather conditions are passable.

I have published routes below. This is an event that is free to take part in and all riders are riding at their own risk. 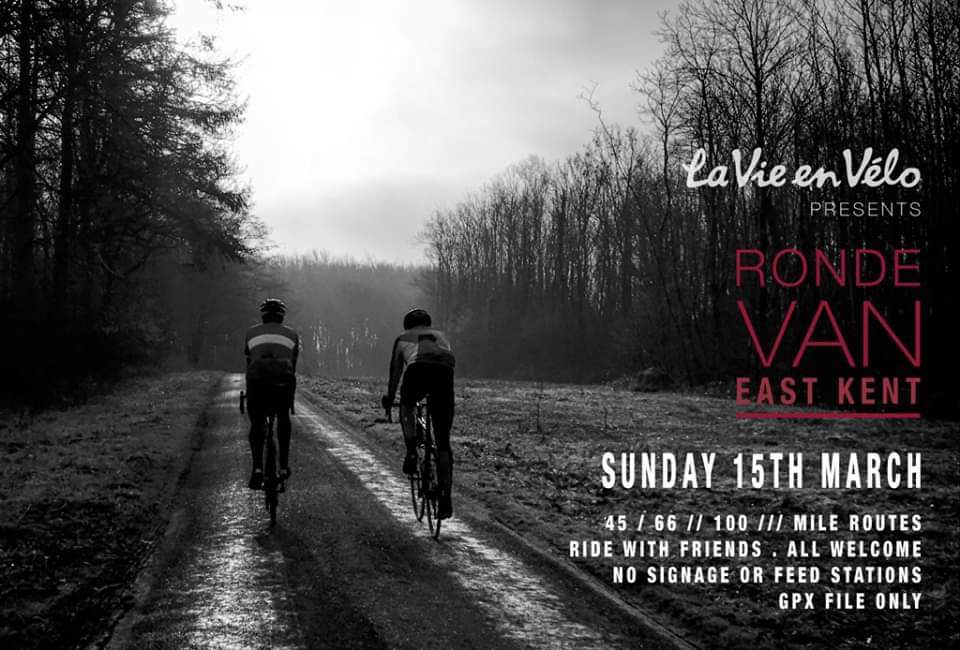 The Ronde van East Kent is La Vie en Vélo's annual birthday bike ride for friends, including the ones we haven't yet met. The original idea was just to do a big ride before my season starts, but it has become a sort of big reunion for people who have been on my trips, and it has in only its third year evolved to include lots of new faces which is just great! A lot of people headed out on my trips this year are using it as a social training ride.

Primarily, I put up-to-date info on a Facebook event page but I know and respect that plenty of people wish to live a life Facebookless. So, I will endeavour to keep this page updated, but if in doubt just email me for info at angus@lavieenvelo.com.

To ease potential congestion in the Beach Café at the start and to try and get us to the midpoint stop at the Independent Pedaler at roughly the same time, around 11ish, then i suggest a self-policed staggered roll out.

Obviously, if you'd like to ride together with people on different distances then just pick a sensible time. 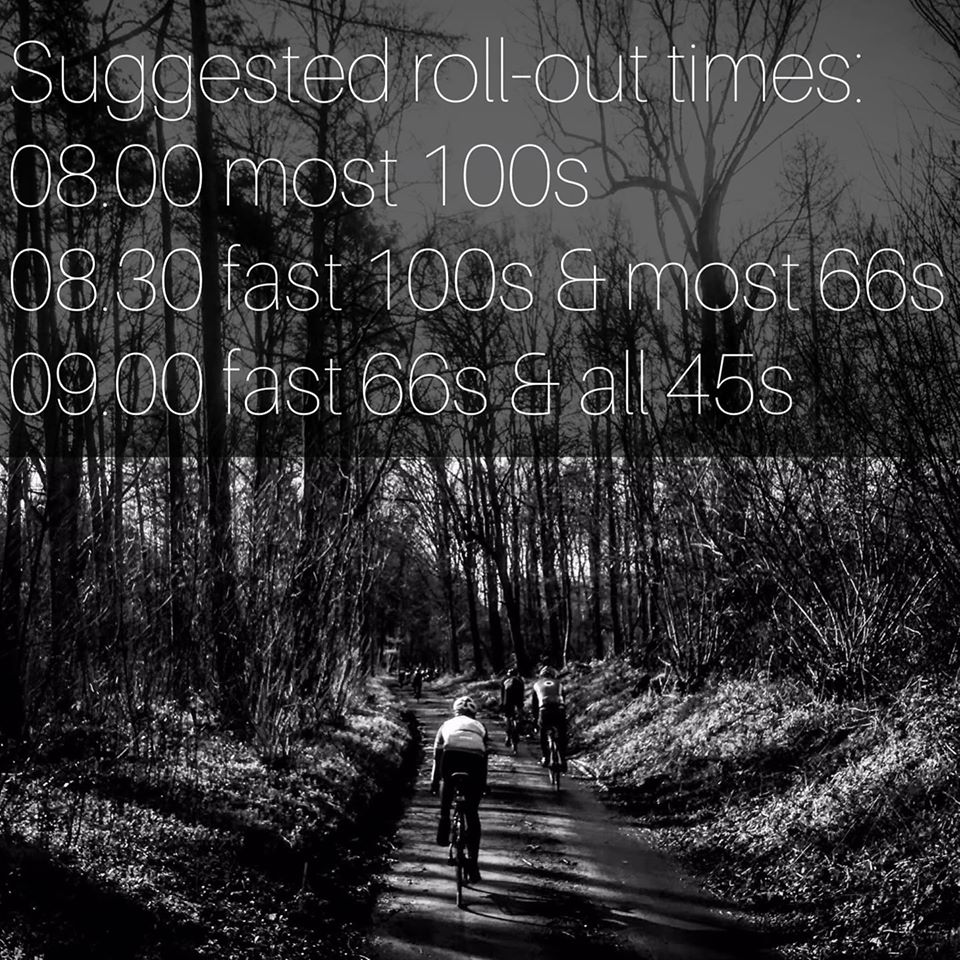 Links to the 2020 routes are published below. All three routes will be anticlockwise loops around Canterbury with the Independent Pedaler at Bridge as a roughly midway stopping point. They know that we are coming.

Every rider is responsible for their own navigation. I publish a route and riders download it and use it however they see fit, or they follow someone else who doesn't mind guiding them.

There are links below to ridewithgps from where you can view and download each route file. You might use that link to generate your own paper maps if you'd like them. I would advise a belt and braces approach to navigation. For those on long routes you need to consider whether your device has enough battery power to last and consider bringing a spare battery pack for back-up.

See the point below about the state of the roads and appropriate tyre choices. 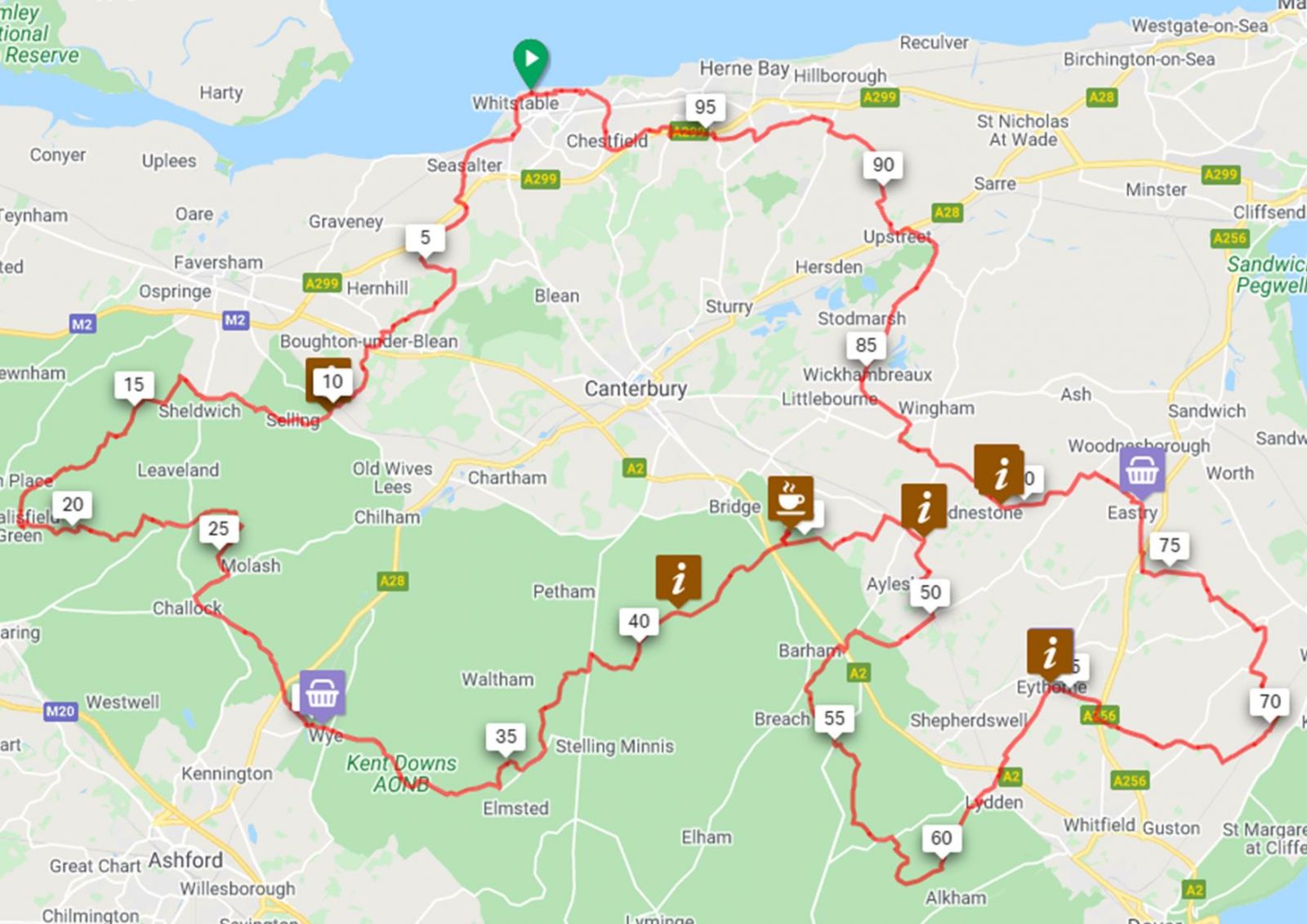 The 100 mile is a gruelling, gnarly, bumpy, mucky box of tricks. Last year's route had 30 flat miles to settle in to the pack and crank up the average speed, but this one is too intricate for that sort of luxury. This is unlikely to be a fast century for anyone at all, but you will see plenty of hidden lanes that you may never have seen before. It can be divided into three thirds.

The first third is the toughest, full of short sharp digs as you clamber up to the high point at Stalisfield and then bump across to come down White Hill that prefaces the big climb of the route, Wye hill, at 31 miles. The first third involves 2361ft/719m of climbing and at one brief point, peaks at 21%. Don't burn your matches too early is my advice.

The next third is still plenty bumpy but not quite as tough as third number one (2172ft/662m). The climbs are generally shorter but still occasionally sharp!

The last third is the easiest by far with only 1333ft/206m of ascent and wider faster roads gives you a bit of respite after a tough 70 miles, but you need to pray for no headwind as it heads west to finish!

The 66 (the metric century) 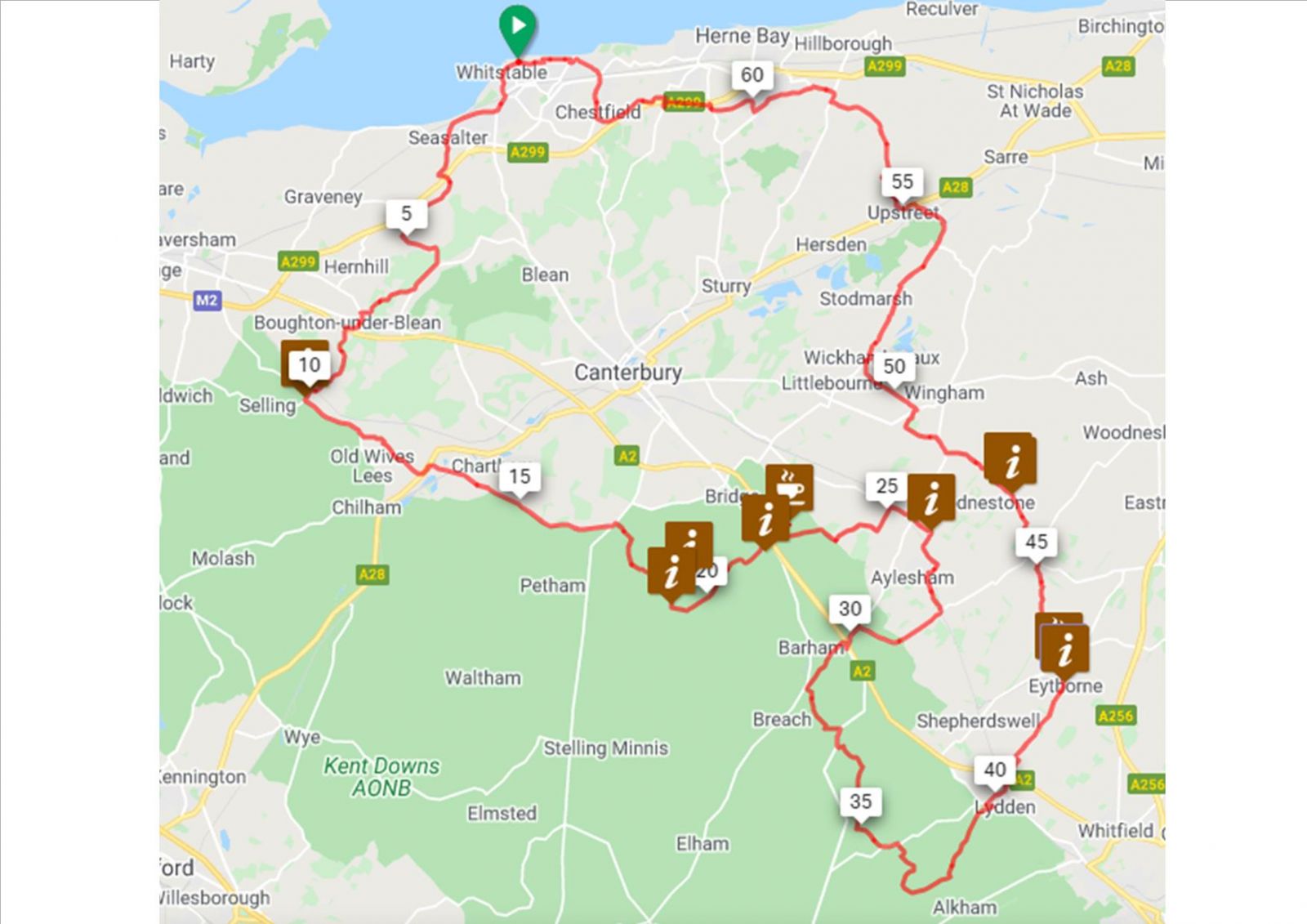 The 66 mile is still a bumpy affair, however it slices off the tough western section and another south-eastern lobe of the 100 mile route, the idea being that all routes should meet for mid to late morning at the Independent Pedaller in Bridge. Like the 100, it can be divided into three thirds.

The first third involves 1500 ft of ascent and is never flat. It ends with the stop at the Independent Pedaller.

The next third is just as bumpy as the first third with four or five decent short but sharpish climbs.

The last third is the easiest by far with only about 800ft of ascent and wider faster roads gives you a bit of respite after a tough 45 miles, but you need to pray for no headwind as it heads west to finish!

You can see and export this file from my ridewithgps page:

The short route is still a good workout with over 2200ft of ascent and some good digs on the way round an anticlockwise Tour de Canterbury. The first half has over 60% of the climbing and like the two longer versions of the route the day gets easier, but you are just praying that the prevailing westerly wind is not out to thwart your westward route back to Whitstable. 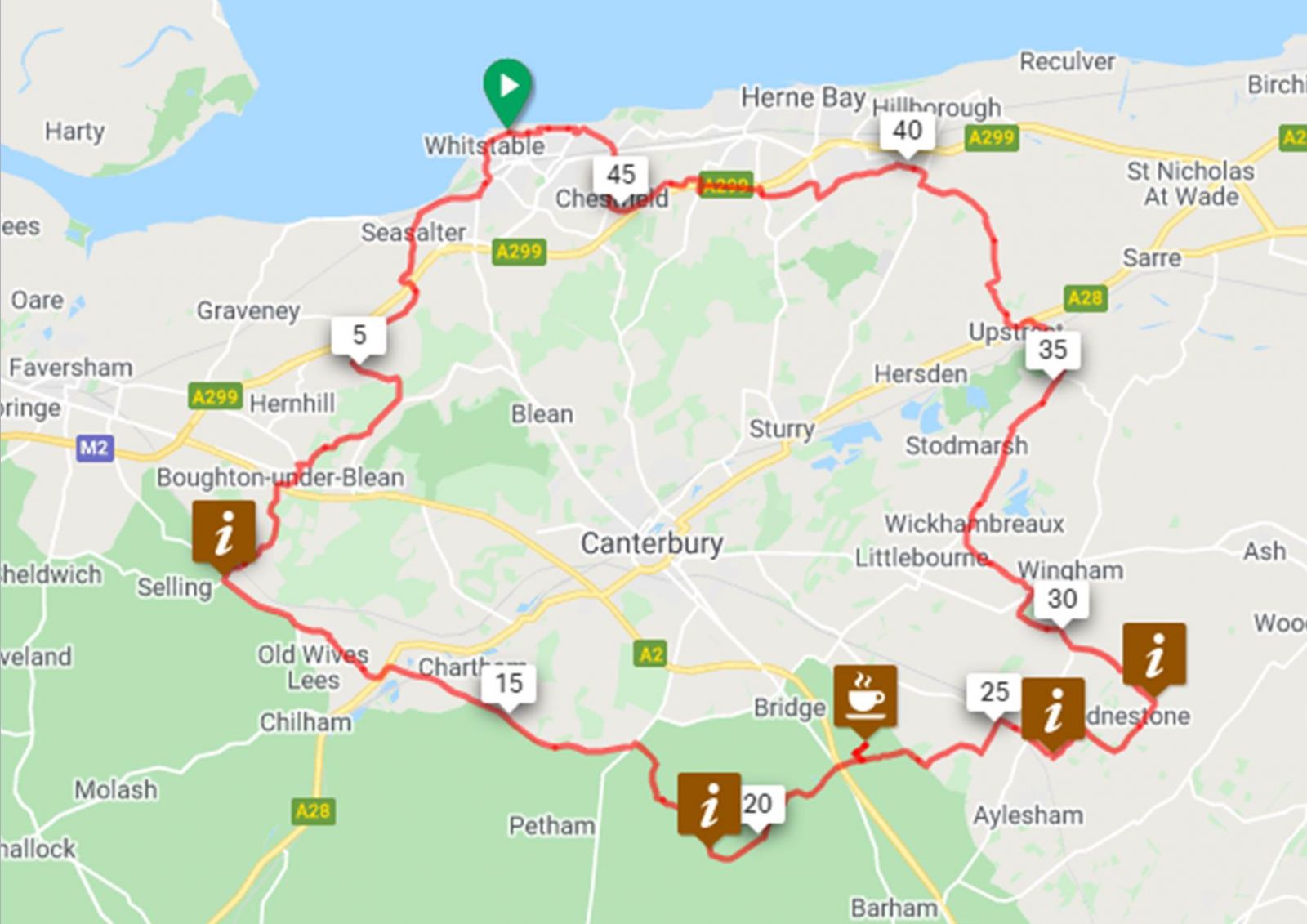 You can see and export this file from my ridewithgps page:

The first roll-out from the Beach Cafe (3 Beach Walk, Whitstable, CT5 2BP) will be at 8am on Sunday, the 15th March. See below for suggested roll-out times.

They have kindly offered to open up early for us so maybe plan to get a coffee and/or a bite to eat before you go to make it worth their while.

The Beach café shuts at 14.00 on a Sunday so may not be open when you get back but the Bubble Café 100yds around the corner (on the beach front above the public loos!) is open until 4pm on Sundays and they know that you might be coming. There is also the Hotel Continental just around the corner which serves drinks and food all afternoon.

The state of the roads and your tyre/wheel/bike choice.

All Ronde van East Kent routes are very purposefully planned to take you on to sleepy little lanes for significant distances. The idea is that you see the best of our neck of the woods and that is best found off the beaten track..

So, you will often be riding on lanes with green bits up the middle, potholes, mud and hedge trimmings.

Good 4-season road bike tyres would be fine, but this is almost certainly too soon to break out the summer bike with the racing wheels and lightweight summer slicks. 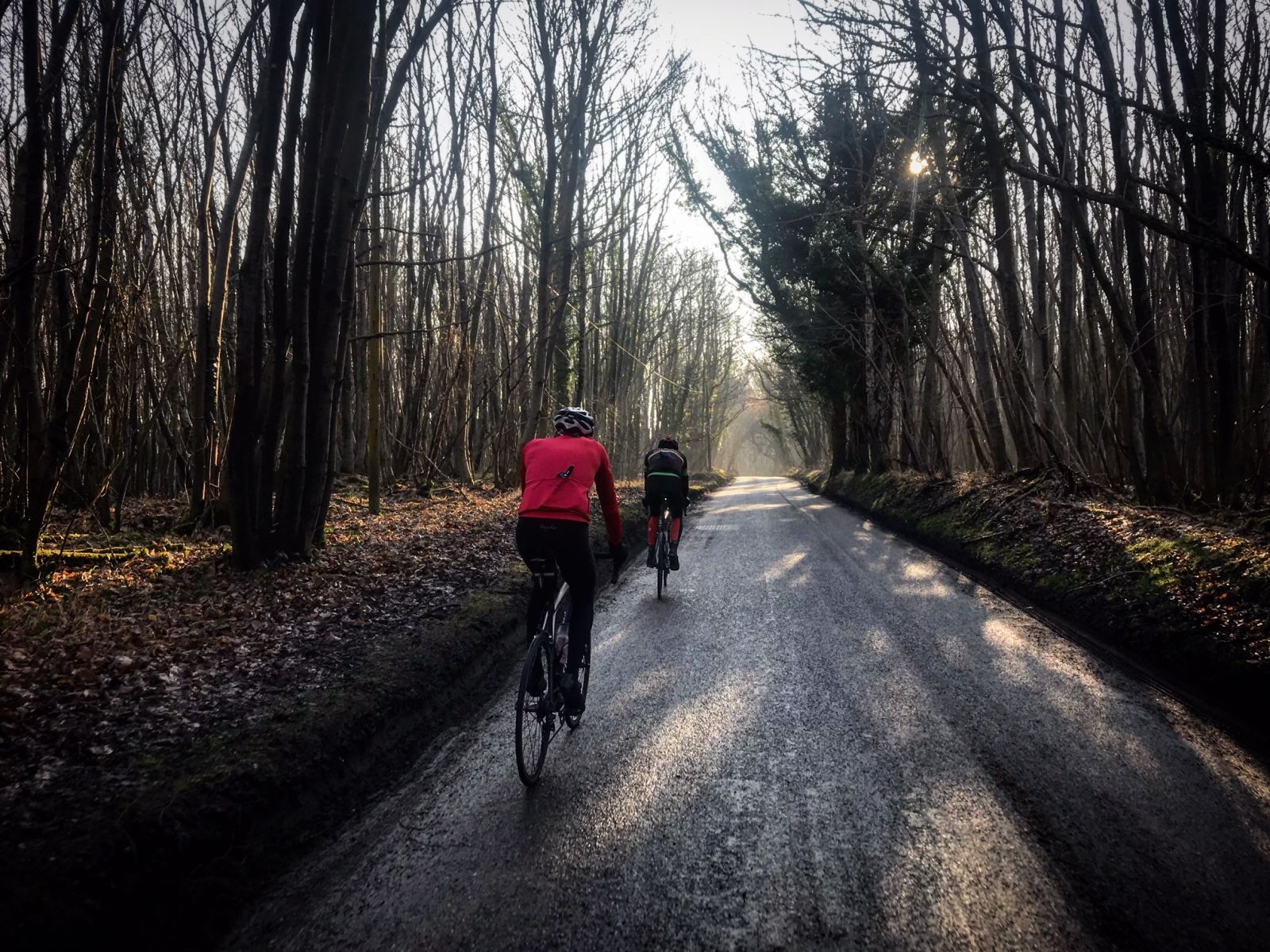 This is, very purposefully, a rural route so there aren't loads of places to stop for refreshments, especially early on a Sunday morning, and there are no formal arrangements, but I have called a couple of places to let them know that you may want to stop in and buy some food and/or drinks. I have indicated on the routes on ridewithgps where you might find sustenance. The obvious point to eat, drink and be merry is at the excellent Independent Pedaler café at Bridge, which is at roughly midway on all three routes. I have warned them that we'll be coming.

If you need it, there is pay & display nearby at the Gorrell Tank car park opposite the harbour, but there is also plenty of free parking in residential streets not far away, especially if you head up towards Tankerton and inland off Northwood Road, or up on Tankerton slopes at Marine Parade.

I think that there are few or no trains arriving into Whitstable from London at that time. Maybe join us a bit further down the route? There is a Victoria train that gets into Faversham at 09.10 which you could use to intercept the route at Oversland (about 10 miles into all thre routes and where the 100 mile route splits from the 48 & 66 routes). Contact me if you'd like the 'peloton' to look out for you.

"Tens of thousands who could never afford to own, feed and stable a horse, had by this bright invention enjoyed the swiftness of motion which is perhaps the most fascinating feature of material life"
Frances Willard